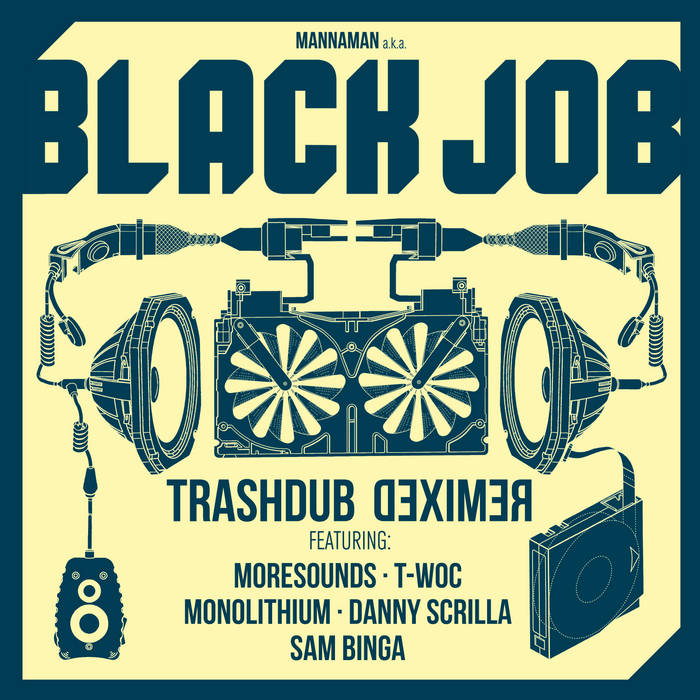 Following Blackjob’s debut, Trashdub EP, in July 2012, Original Cultures has called in five of the finest producers around to refix the dub styles of the original. The results are released in late February 2013 as a digital EP and vinyl 12” featuring originals and remixes.

Paris’ Moresounds and Dublin’s T-Woc take Rise Again and MMD and mutate them along ‘traditional’ lines: deep echoes, spacious reverbs, physical basslines and in the case of the former a real sense of what dubbing means while the later zaps you with the new synth melodies.

Canada’s Monolithium for his part flips MMD into a hypnotic dub techno number that echoes the best of Rhythm & Sound with a modern touch. Suz’s vocals become a universe of their own to loose yourself in. Munich’s Danny Scrilla buries soundboys with his Rise Again refix, a forward stepper with ten-ton heavy bass and snares sharp enough to cut your head off.

The remixes are rounded off by Bristol’s Sam Binga (fka Baobinga) who returns the original’s hat tip to the west country city by taking Rise Again into 170 weirdstep territories: a chest-caving riddim built from bass kicks balanced with subtle, emotive melodies.

All five remixes will be available as a digital release. This will be preceded by a 12” release featuring three original tracks (Rise Again, Rude and DUDUBFORDU) and three remixes (Danny Scrilla, T-Woc, Sam Binga). The 12” will come as a limited edition of 300 with screenprinted sleeves and labels.

Blackjob is the latest project from famed Italian bassist Mannaman, a musician who over the last 20 years has worked with renowned Italian artists and collectives such as the Isola Posse All Stars and Casino Royale as well as Howie B and Tim Holmes from Death In Vegas.